When people say “It is not what you know, it is who you know”, I can vouch for that.

My takeaway? I wouldn’t even get the offers had I not known the friends who invited me in the first place. I never even thought that I would judge professionally in the same panel as other proficient speakers! I gained experience, I was inspired by the contestants, and I get paid for it. Those two friends whom I know from a community organization that I join are the embodiment of networking.

Networking is essential for your professional and personal growth. However, there are people out there who feel uncomfortable with the idea of networking. They might either dislike social interaction or see it as people trying to get some benefits from each others. The later, though a legitimate reason to connect, gives networking a negative impression that none of those parties involved are making genuine interaction. Everyone has a hidden agenda. But, it is not always like that and it doesn’t have to be. 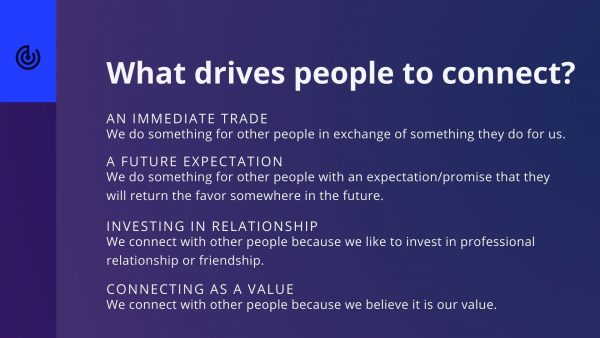 In a podcast interview, Reid Hoffman (Co-Founder of LinkedIn) said that there are four driving reasons why people connect. The first two reasons are transactional while the other two are more meaningful (see image above). Realizing that some people do an immediate trade or expect something in return, I can say I understand where the inconvenient feeling about networking comes from. Yet the other two display that networking is supposed to be sincere because it is a shared-value. You connect with other people because it is the right thing to do.

That is also what applied to my previous case. I didn’t connect with my two friends solely because I thought I would be benefitted from them. Do I hope my networking efforts open up more opportunities for me? Of course, nothing is wrong with that. But when we switch the mindset to networking as a way to invest in relationship or as a value, we won’t see it as a waste of time when it doesn’t bring us immediate returns. It will not bring us joy either when the other party is benefitted more with our helps than us with their helps. The whole thing becomes less genuine. 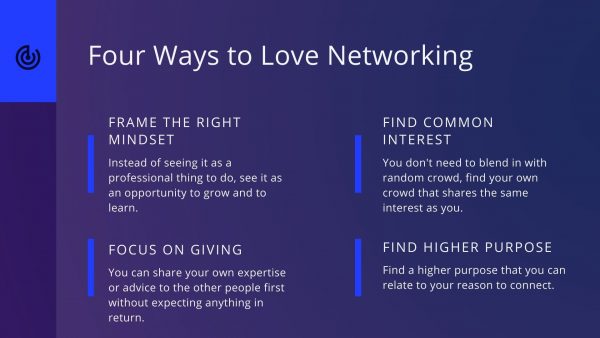 Wouldn’t it be nice if more people apply the last two reasons when they attend networking party? An article from Harvard Business Review came up with four different ways in learning to love networking (see image above). When you frame the right mindset, find common interest, focus on giving, and find a higher purpose, networking becomes less promotional and selfless. A plus point for the last one, to find a higher purpose. For example, when you represent a youth community in a networking event, your higher purpose might be to empower more young people to be more active.

I have to admit that I wasn’t really thinking of any higher purposes when I connected with my previous two friends. However, I and my friends shared the same interest : public speaking. That way, I didn’t have to pretend to be excited during our conversation because the truth is I WAS excited about it! I also believe that connecting with them would lead me to learn a lot from them as well, both direct and indirect. I didn’t feel hesitant either when other people asked me for my advice related to their  speech performance because maybe it would help them. And these things that I apply when I connect actually smooth the process of networking.

One thing to remember, you don’t have to start building your contact list to expand your networking circle. You can start by mastering and exploring further your current expertise. When you do that, people will recognize you better and know where to call when they need the skills you have. I am definitely not be the best speaker out there, but I have been learning the art of speaking for four years that I have grown so much compared to myself four years ago. Luckily my two friends noticed that. That is how they decided to give me a call.

So is your networking working? Many of us still struggle to expand our network. Nevertheless, by identifying our reasons to connect, learning to love networking, and mastering our own expertise, I am confident to say that networking is definitely worth your time.